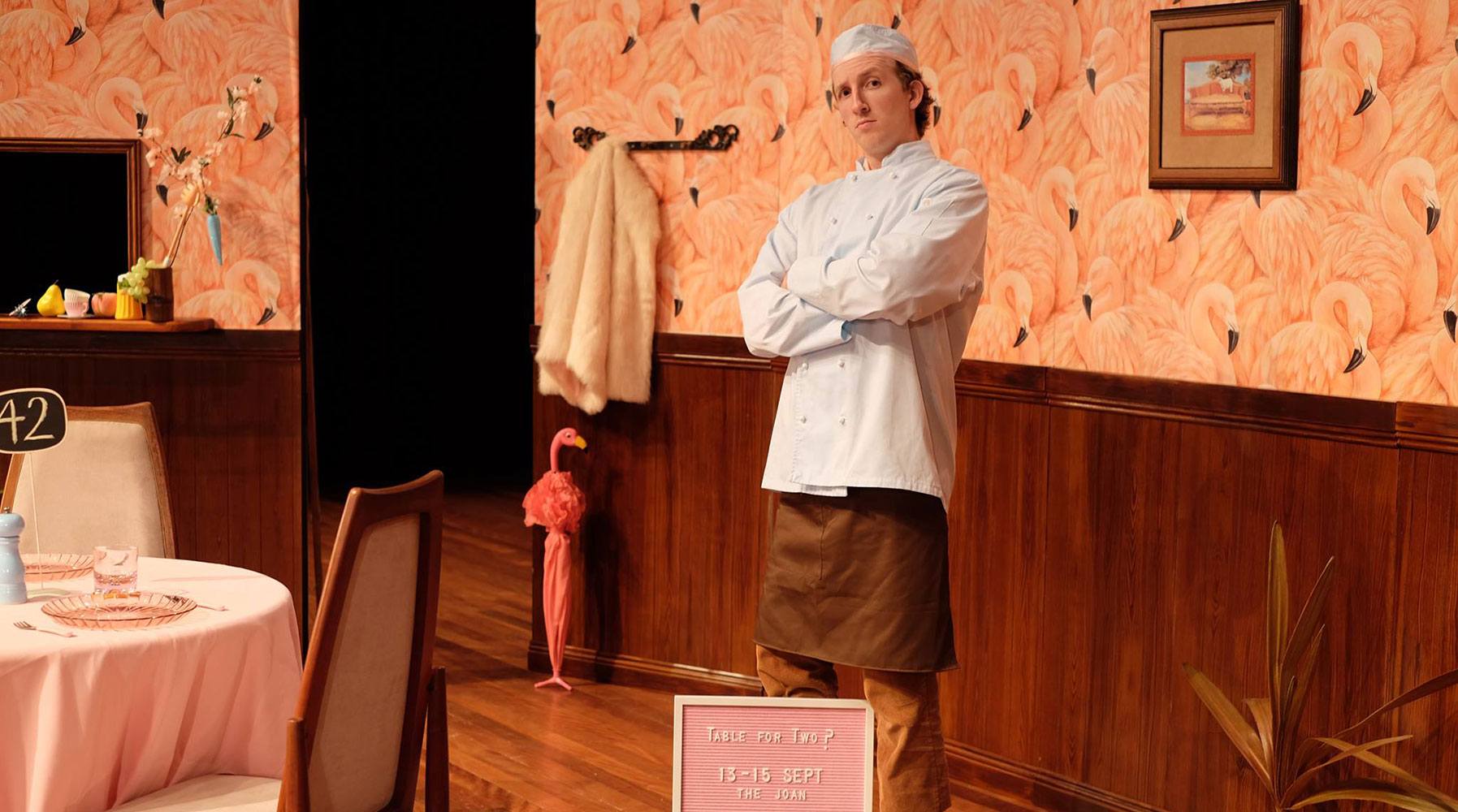 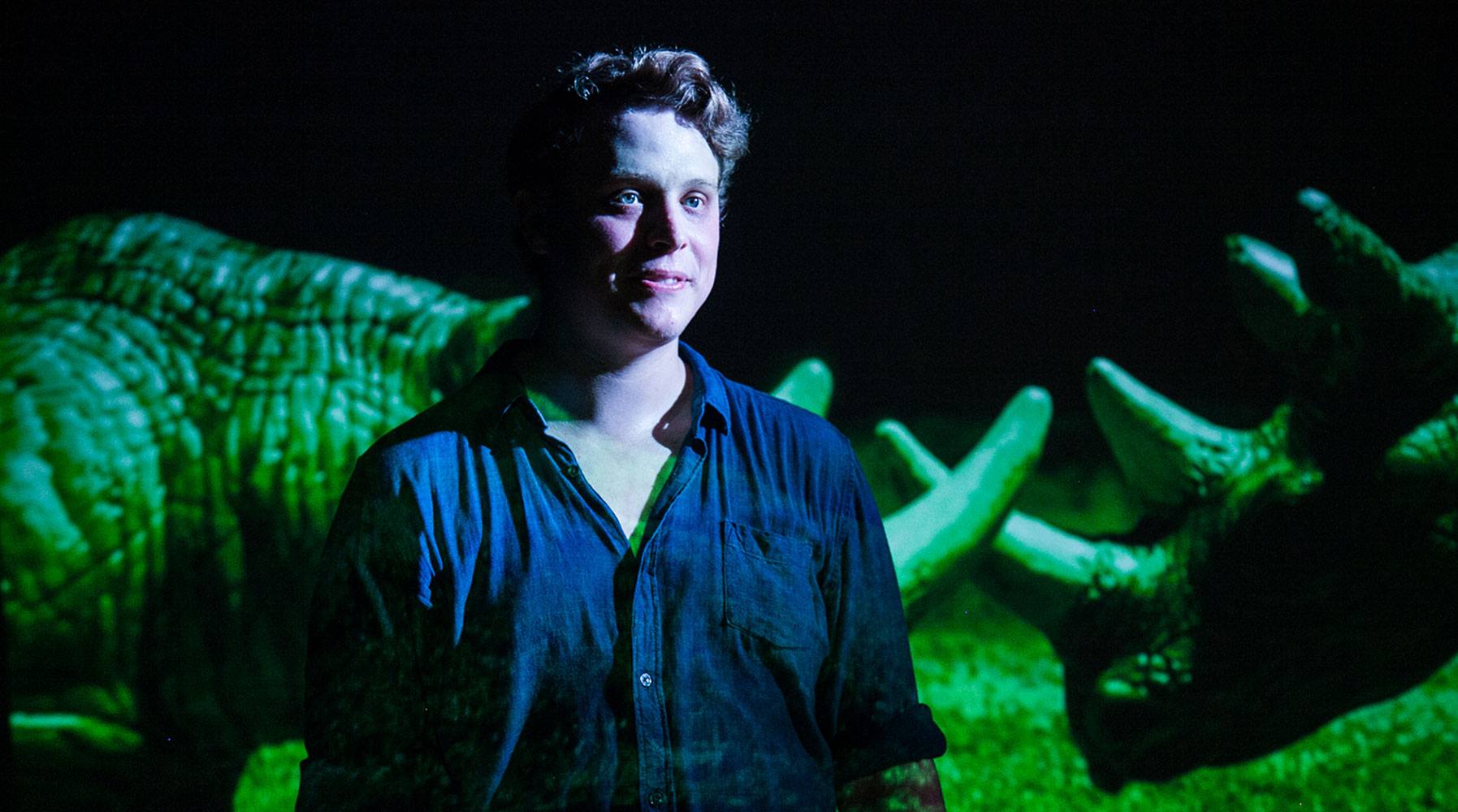 Photo / Katy Green-Loughrey. Nathan Harrison in How I Saved the Western Black Rhino Photo / Katy Green-Loughrey. Rachel Roberts in Everything You Ever Wanted.

Q Theatre Lab is Q Theatre’s artist in residence program. The residency is designed to make creative space and time for the development of dynamic projects at an early stage of their conception. Projects are selected through an open callout process and successful applicants will receive financial assistance, space to develop the work, as well as technical and dramaturgical support for dedicated creative development.

Deborah Pollard Eighteen Years On
Every year more and more people experience the impacts of bushfire devastation. This is the story of one such family who lost their home during the 2003 Canberra bushfires. Eighteen years on they still remember, they can’t forget, but they can carry on. With wry wit, compelling storytelling and song, Deborah Pollard conjures into being a theatrical portrait of the very human face of climate change catastrophe.

Emerging theatre company GradCo. Studio will develop a rewrite of Shakespeare’s The Merchant of Venice, called The Market Man. The story will take the original text with its themes of race, religion, wealth and class and work them into a modern context focusing on the divide between the racially diverse and low socio-economic area of Fairfield against the affluent suburbs of The North Shore.

Singer Jermaine Chau has teamed up with University of New England lecturers and composers Donna Hewitt and Paul Smith for an exploration on the dominant themes of puppetry in The Digital Marionette.

NIDA graduate and award-winning Performance and Artistic Director Felicity Nicol will develop Political Animals, an intergenerational conversation between Australian Queer people. Political Animals will explore what it means to be queer and the roles of protest, politics and party.

Writer/director Jules Orcullo will explore her Filipina-Australian heritage in Twenty One Sixty Five. The performance follows Sixty Five a retired, God-fearing Filipina who migrated to Australia in 1976 to provide for her family in the Philippines and to start a new, stable but exciting life on foreign soil.

Jordan Manalo-Shea – Kasama Kita (I’m With You). After the interviews with members of the Balmain Hospital nursing staff 1973/74. The piece centres on four Filipino students; Marie, Amelia, Agnes and Poncho, who have come to Australia to better themselves and to contribute to the country. They meet with culture clash, institutional racism new cuisine, slang and music.

Vonne Patiag – The Life Cycle of Blanco, an hour-long narrative/physical theatre piece that explores the exhaustion caused by institutional racism and class privilege, especially within the Arts, resulting in the short ‘life cycles’ of Asian actors and creatives in Australia.

Margaret Davis – The Bodies Project. A project exploring stories not only of the organic changes in women’s bodies over a lifetime, but also confront the continuation of those changes beyond life itself. How do we, in a secular age obsessed with the cult of eternal youth, accept the fact that we will all eventually decay and decompose?


Will Tredinnick – Table for Two? A self-devised work about change and the different ways in which change is experienced. The characters found within the world of  Table For Two? are the vessels by which we see these differing reactions playing out: the joy, the struggle, the pain, the anxiety, and the unknown. Part physical comedy, part farce, part social experiment, the work is a manifestation of Will Tredinnick’s experience growing up, living and working in Western Sydney and an inquiry into what the future holds for us Westies. Table for Two was presented by Q Theatre and Sydney Fringe in 2018 at The Joan and in the Sydney CDB, and Will went on to win a 2018 Sydney Fringe Festival NIDA Award.


Emerging artist Joel Burrows, who was part of The Q’s Propel Playwriting program in 2016, used the Residency to work on his new project Coconuts & Bananas. This project tells the story of Deri, an Australian teenager who has everything – his own car, a hot girlfriend, and he once stole Hugh Jackman’s underwear from a public swimming pool. To his horror all this changes when he secretly reads his girlfriend’s diary…

Carolyn Eccles and Sean O’Keeffe, Blue Mountains-based artists with a passion for cross-disciplinary practice, developed their performance investigation Glenn Meringuey, exploring the title character, the mysterious and little-known Glenn Meringuey, a 1930s Blue Mountains-based movie star whose work, until recently, has been lost from the archives.

Emily Ayoub and Clockfire Theatre Company are an up and coming Western Sydney based company of theatre makers, creating dynamic new work with diverse teams of creatives.  Their project – Sultana’s Dream and the Meeting of a Number of Wise Women – is an original theatrical creation, based on the 111-year-old Indian feminist utopian story ‘Sultana’s Dream’, written by Muslim feminist writer and social reformer Begum Rokeya Sakhawat Hossain.

Rachel Roberts and Nathan Harrison shared a Residency with two projects, the first of which, Everything You Ever Wanted, explores the science of dieting, weight loss and disordered eating – a deeply personal undertaking into a touchy subject area. The second project, How I Saved the Western Black Rhino, is a storytelling performance lecture about extinction, wildlife conservation and what it takes to bring a species back from the brink.

These two works went on to be produced by Q Theatre as part of The Joan’s 2018 Subscription Season.